How this project came about

The idea for this project came from Joana Filipa Viana Canelas during her time in The School of Anthropology and Conservation at The University of Kent. Joana was awarded funds through the Postgraduate Experience Award scheme which enabled her to deliver the project. The report that Joana made to describe what was delivered, including a two-day event can be read as a PDF here

What is the The Tree Ogham? 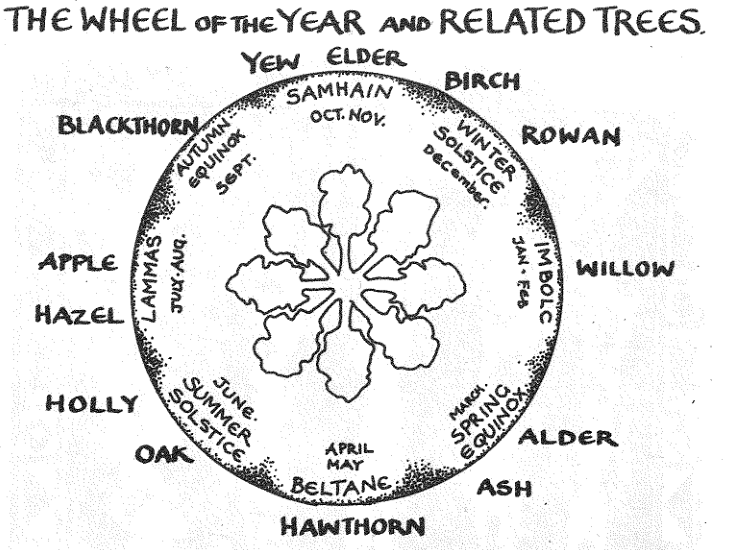 Like alpha-beta, the ogham is sometimes called by its first letters, beth luis fearn or beith luis nin.

It is pronounced oh-wam, or oh-am, or ohm (to rhyme with home).

…but maybe it is ogg-ham. The name may derive from the Irish god Ogma.

The name may derive from the Old Irish og-úaim, the mark or seam left by a sharp point – perhaps symbolising the inscription of the letters in stone or wood.

Each letter is a vertical or slightly slanted line with horizontal notches. They are grouped in four sets of ascending horizontal strokes per set. There is a fifth set of a different design, often called forfedha and considered a later development, perhaps by Benedictine monks of Ireland.

They are typically incised on the edges of standing stones, tree trunks and branches.

There are around four hundred stone inscriptions in the British Isles. Most are found in Munster – the southern province of Ireland – others in Pembrokeshire in Wales.

It was not used as a spoken language but rather a symbolic script interpreted independently – translatable to other languages.

Some argue that as a script it was based on Latin. A number of ogham stones have parallel Latin inscriptions. The stones of St Martin’s Church, Lewannick, Cornwall, also have inscribed Latin letters, likely a translation from the Ogham script.

Some argue that its template was Greek. Others that it was runic. Others that it was early Irish. Robert Graves, in The White Goddess, suggests that it derived from Stone Age cultures of the Middle East, that it was associated with moon and goddess worship and that it spread secretively through the Classical and the later Celtic worlds.

Graves sees the four sets of five letters as derived from finger-signals and associated with chiromancy and magic.

Some argue that it originated in ancient Libya.

Some relate it to ancient ‘stick writing’ of West Africa.

… that it was used by early Christians during the gnostic, mystical and strikingly Druidic pre-Patrick Christianity of the western Celtic lands. It may have been used by such early Christians in resistance to ecclesiastical authority of Rome…

Ogham-like petroglyphs have been found in West Virginia, suggesting that the Irish may have travelled to North America long before Columbus. This would give further weight to the possibility that the fabled navigation of the sixth century St Brendan, long taken to be allegorical, may have been based on a true voyage along the north Atlantic, a hypothesis maintained by explorer Tim Severin, who in 1977 crossed the Atlantic in a replica of Brendan’s ox-hidehulled currach.

The ogham may have developed from a five-notch system used on tally-sticks for counting livestock.

The ogham was bardic, used for teaching the rules and metrics of poetry in the Gaelic language.

In the Cornish-Irish legend of Tristan and Iseult, Tristan cuts and trims a hazel branch, upon which he carves his name in cryptic inscriptions and which he floats downstream to alert Iseult. Whilst not named, Tristan’s script is likely ogham. Secret love code between secret lovers.

In The Voyage of Bran, the hero Bran returns to Ireland after several hundred years seafaring in the otherworld. One of shipmates jumps ashore and is turned immediately to ashes. Bran decides to stay aboard, writing his adventures in ogham quatrains for the crowd ashore before departing to oblivion.

Ogham inscriptions are difficult to date accurately, as they often lack clear archaeological context. They are hard to date on epigraphic grounds because they are less specific and more variable in meaning than Latin letters.

The great code-breaking manuscript is the Book of Ballymote, a 14th century illuminated manuscript from County Sligo. In addition to accounts of Noah’s flood, the wanderings of the Hebrews, the sagas of Finn, the life of St Patrick, genealogies of clans and kings of Ulster, Leinster, Connaught and Munster, the destruction of Troy and the wanderings of Ulysses, the book contains a treatise on the Ogham, offering translations into Irish and Latin, discussing the variant vocabulary, the grammar and the syntax.

In addition to referring to a sound and perhaps to a Latin letter, each ogham inscription refers to a tree, a colour, an animal, a moment on the Celtic annual cycle of solar feast-days, and an array of associated concepts.

As such they are a powerful map of Celtic cosmology.

Ioho, or Idhadh – the yew – is dark green, associated with the spider, and with Alban Arthan, the Winter Solstice. It is the tree of the dead, the slow-grower, the long-liver, the poisonous, the shadow, the shade. Yet the yew has the capacity to renew itself through growing new trunks from vertical branches, so just as each side of the yin-yang contains the seed of its opposite, so the yew is also the tree of regeneration, of rebirth and renewal. It is the final ogham letter on the calendar, the end of one cycle, the beginning of the next.

Beithe – the birch– the first tree of the calendar. It is associated with white and silver, with cattle, and with the period immediately following the Winter Solstice, when the days first begin to grow longer and the nights shorter. Beithe is associated with the birch’s role as woodland pioneer, its capacity to colonise new terrain. It symbolises change, new beginnings, fresh starts, emergent growth. Sweeping with birch twigs cleanses the swept place and cleanses the sweeper.

The ogham is thus a fruitful language of magic and divination.

Like the major arcana of the Tarot, like the sixty-four hexagrams of the I Ching, like the constellations and planets of astrology, each letter is a complex web of meaning and onward association.

Like all divinatory languages, the ogham is fertile with meaning, variable in meaning, obscure in meaning, general and yet particular to the individual.

Ogham is not a single, fixed system. Like all languages it shifts with the user. Surviving stones show modifications, as new symbols were invented and older ones were lost.

Whilst analysed and decoded, the ogham remains mysterious and enigmatic.

The letters draw us to a slow, poetic, cyclical, non-determinant system of thought. Through meditating on the ogham we meditate on the tree, we meditate on the properties of the tree, on its form, its smells, it sounds, it touch, its history, its presence in mythology and folklore, in industry, carpentry, weaponry, food, medicine and the landscape.

We meditate on births and buds, thrusts and spurts, growths, advances and progressions, what Thomas Hardy once called ‘the ancient pulse of germ and birth.’

We meditate on endurance and maintenance, on structure and support, on nourishment and survival.

La Roue de la Fortune, the tenth card of the major arcana of the Tarot.

The waxing and the waning of all that lives.

The ogham allows us to see cross-currents and webs of connections. It allows us to perceive the world as a system of correspondence and sympathy.

The ogham is a secret language. That is why it has always been a language of resistance to the structures of power that seek to order, classify, quantify, commodify, demand and command.

A series of notches carved in stone. Lines daubed in crude paint on a cave wall. Carved sticks floated down river. Subtle signs on the trunks of a sacred grove of oaks. Sigils in the darkness.

Protect the trees. Our lives depend on it.

Protect the trees, and the trees will protect us…